Life Stages: When the Caregiver Becomes the Cared For

A few years ago, we lost my father. After a year of fighting liver disease, he developed cancer, and within three months, he was gone.

But he did not go gently into that good night.

My father was a

vibrant, active, joyous man. He based his identity on his nearly 50-year career as a dentist. He loved to travel, and he curated great works of art and an impressive wine cellar. He collected people too, and everyone he met was his new best friend.

So it was difficult when he became ill. For a year prior to his diagnosis, he refused to see a doctor. It was obvious there was something wrong. His skin was yellow and so were his eyeballs. But he was scared. Stubborn too. He didn’t want to know what was wrong or be at anyone’s mercy. He was used to caring for his five children and his wife, not the reverse. The word invalid was not in his vocabulary.

Things changed once he was diagnosed. He had more doctors’ appointments than you could count on your fingers. He was tired. He had a special diet, multiple medications, and worst of all, had to cut down on his work hours.

His wife, Patricia, a high school teacher, had just retired, which was very lucky. It meant that she was available to be with him, help him when he needed it, and drive him anywhere. It was a full-time job for her, exhausting, and probably a bit alienating, especially when he became sicker and required more care.

She wasn’t unique, though. One in four Canadians currently identify as caregivers, and that number is expected to grow to one in three by 2020. To make the situation harder for her, he wouldn’t let us children help. He didn’t want us to see him like he was. He wanted us to know him as the strong, virile head of our family. Not as a sick person.

We tried to provide support where we could, since caregiving was new to all of us. In a short period of time, Patricia went through all of the stages of caregiving— from being a helper to providing 24/7 support. We offered to do some of the driving, pick up medicines, or to stay with him so she could get out. But that was just a drop in the bucket. 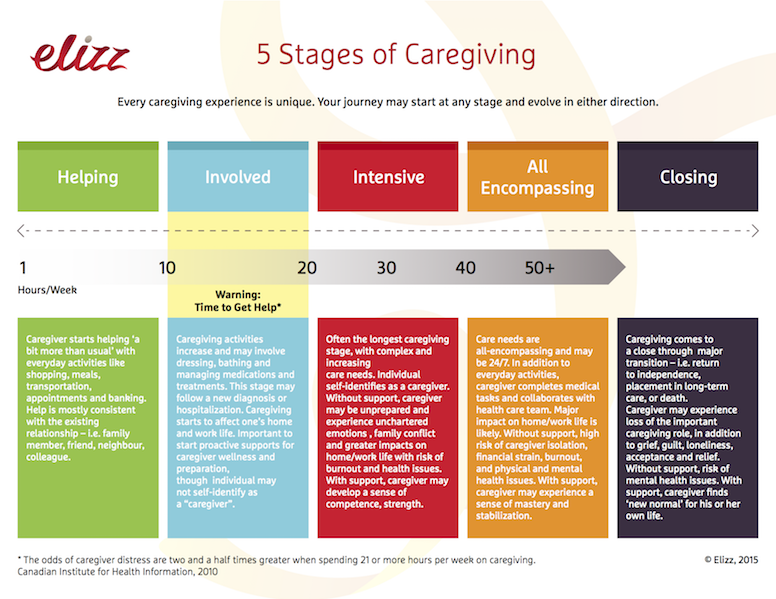 To provide relief, there were nurses and Personal Support Workers visiting, too. In fact, there were a whole lot of health care professionals to help us navigate the process, which meant there were also many personalities and priorities to accommodate. Knowing how to partner with professionals became an integral part of the caregiving process.

What we noticed, watching from the outside, was how skillfully my father and Patricia navigated the transition. While she knew she was giving care and he was receiving it, they treated each other with love and respect. In fact, we all did. We were a family of spouses, a father, daughters, sons, and grandkids. We were challenged, sure, but the time we spent together was rewarding. Through the pain, we talked and laughed, and remembered and shared.

We supported each other, which is how it’s meant to be. As Elizz, one of our greatest resources promises, “Support for you, care for those who depend on you.” It’s important that there’s a place like this website to help us caregivers as we navigate the health care system and build a plan that works for everyone. It’s also important that caregivers seek assistance and support from others in places like Elizz’s forums.

When you set out in life, you never expect to have to care for someone as they age or become ill. I found out that there are no hard and fast rules for how to make the transition except for the need for understanding, information, and the knowledge that you’re not alone.

This is a sponsored post written by me on behalf of Elizz for IZEA. All opinions are 100% mine.

Mara Shapiro is Co-Editor, Community of BrazenWoman. She is proof that it's never too late to reinvent yourself, and also that you cannot have too many pairs of shoes and lipglosses. A Social Media addict, Community Manager, and insatiable lover of movie popcorn, Mara is always on the hunt for the next best thing. You'll often find her laughing and dancing, phone in one hand, and a glass of red in the other. The only time she's not talking is when she's sleeping.