Conflict Resolution: How to Fight Fair So Everyone Wins

The downside of every relationship: conflict. Whether you’ve been together for six months or three years, you can bet on it. The fight is coming for you. No one is immune but let’s hope you can survive alive so that everyone wins.

Not surprisingly, the ability to resolve conflict is key to keeping a long-lasting relationship from internal combustion. But when you’re about to blow, it can be easier to keep a lid on it. Bad idea, says life coach Steven DeSalvo. That’s because while we can let small conflicts float for awhile, they’ll inevitably grow until they do real damage: resentment and uncertainty. And no one wants that.

Whatever its source, it’s actually easier to resolve conflicts than to maintain the distance a conflict creates over time.

Bottom line: Developing good conflict resolution skills is key to healthy relationships. So how do we engage in a process that will lead to lasting resolution—so that everyone (read: you) wins in the end? Just follow these six steps.

HOW TO FIGHT FAIR: 6 STEPS TO HEALTHY CONFLICT 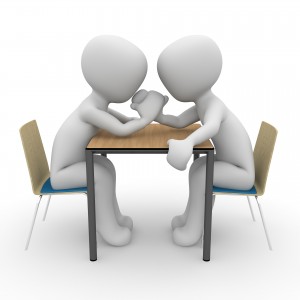 Walking away and refusing to even acknowledge that a conflict, let alone discuss it, never works. Way too many conflicts are left unresolved due to an avoidance of the issue. The first step to resolving the problem is admitting that in fact there is one. When we show up (face-to-face, if possible!), then the conflict resolution process can begin. Showing up shows we care and value the relationship enough to take the first step toward resolution.

2. BE WILLING TO FIGHT

Each participant must be willing to engage with a clear intention to resolve the conflict. If a participant won’t engage willingly, then ask directly for their participation. When we enter conflict resolution with an intention to resolve the issues, rather than a need to be right, compromise is put in motion. One person needs to take the first step, but when both parties willingly engage, conflicts have the greatest potential for lasting resolution.

4. CLOSE YOUR MOUTH AND OPEN YOUR EARS

Both sides must listen openly to each other’s feelings and thoughts. Feelings of anger or resentment can get in the way and prevent a healthy dialogue. Each person must work through anger or resentment before they can engage in constructive conversation that allows for calm expression of feelings and thoughts. When our position, view or opinion in a conflict is heard and acknowledged, this opens us to resolving internal feelings of conflict that arose from the original conflict. It does not mean you should agree with every feeling or thought that surfaces, but you must be willing to listen to the other person’s perspective. Good listening skills heal multitudes of hurt in conflicts.

For a conflict to be understood by both people, they each must clarify their positions regarding what created the conflict. We often differ in our opinions when it comes to what the conflict was about or where it originated. Find areas where you both agree, and identify those areas where you disagree. Getting clarity of the conflict through areas of agreement and disagreement helps toward constructive resolution.

The final step is to find agreement. Each person states the agreements they require in order to resolve the conflict. Do you need an apology? What steps can be taken to avoid the same type of conflict in the future? The resolution has to be agreeable to both sides or someone will leave the interaction feeling that there are unresolved issues. The key is to agree on how to handle similar situations going forward.

So what do you think? Now that you know how to fight fair, are you ready for some healthy conflict?

Steven DeSalvo is the author of the book Relationship Dynamics which looks at how we develop deeper and healthier connections that will fulfill our desire for lasting and meaningful relationships. Connect with Steven on Twitter and Facebook.